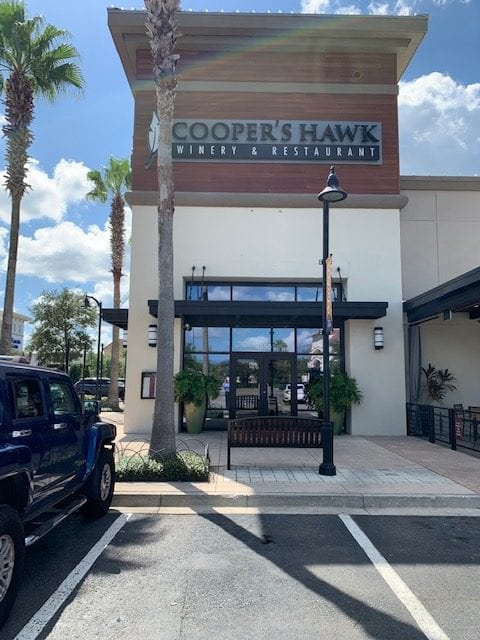 In June of 2019, the Florida Department of Health in Duval County (DOH-Duval) was notified of an outbreak of gastrointestinal illness (food poisoning) among employees of the local Jacksonville Cooper’s Hawk Winery – the restaurant corporate manager called in the notification. By that time, about 20 employees had become ill. On Sunday, June 23 the Regional Environmental Epidemiologist (REE) was notified by Florida Poison Information Control Network that 16 out of 17 persons who dined at Cooper’s Hawk with a group on June 11, 2019 were ill with a gastrointestinal illness.  This information was sent to DOH-Duval who began an outbreak investigation on June 24.

That same day, another individual called to report he was in a different group (24 persons) who all became ill (except one person) after eating at Cooper’s Hawk Winery in Jacksonville on June 13.

Between June 24 and July 3, 2019, a total of six independent parties contacted DOH-Duval Epidemiology to report gastrointestinal illness after they ate food from the Jacksonville Cooper’s Hawk Winery between June 11 and June 15.

On July 8, the local news media reported on the outbreak which resulted in additional patrons calling in and reporting their illnesses.

A number of these victims contacted lawyers, including those who contacted a national food poisoning law firm, Ron Simon & Associates, and filed claims against Cooper’s Hawk. Most of the victims, however, did not file a claim in 2019 or before now. Now a few of those are coming forward to seek compensation as Florida has a four-year Statute of Limitations that has not yet barred people from seeking compensation for their medical costs, lost wages, expenses, and pain and suffering caused by the Cooper’s Hawk parasite outbreak – a parasite that was likely on fresh basil that they procured from The Garden Wholesale, Inc. and Harvest Sensations, two Florida companies also implicated in the outbreak.

At the time of the outbreak, a Cooper’s Hawk representative stated:

“Cooper’s Hawk Winery & Restaurant is committed to the health and safety of our Guest, our Staff, and our Community. We began receiving calls late Friday on June 21st from a few guests complaining of illness. First thing the following morning, we notified the Health Department. Through the County Health Department’s  investigative process, the illness appears to be linked to Cyclospora. Cyclospora typically comes from a fresh produce food item purchased through a 3rd party supplier. Unfortunately, food grade produce washes do not kill Cyclospora and they are not visible to the naked eye. We have removed the product and changed suppliers for the ingredient in question.

Illnesses are limited to a portion of Guests and some Employees who ate during the period of June 11th – 15th. This matter is currently being investigated by the local county Health Department & local Health Authorities to support tracing the source of the food items. Those who participated in the investigation have played a valuable part in collecting the data needed to identify the source.

The Restaurant was free from any ongoing exposure or risk by the time the first Guest call was received as all fresh food products are typically consumed or disposed within a two to five-day period. Cooper’s Hawk continues to work closely with the Health Department to follow all necessary protocols while upholding our commitment to the highest health and food safety standards in our restaurants. Cooper’s Hawk is also encouraging guests and the public who may have questions or concerns to reach out to our food safety/customer care line at 844-944-1444.”

There are still pending lawsuits against Cooper’s Hawk, which apparently procured the fresh basil from The Garden Wholesale, Inc. who obtained the produce from Harvest Sensations.  Both are Florida companies.

Of the 153 confirmed and probable cases of Cyclosporiasis, identified by DOH-Duval Environmental Health, all 153 experienced diarrhea; 123 reported nausea; 107 suffered abdominal cramping; 101 were fatigued; 98 were remarkable for weakness; 68 registered a fever; 66 were notable for chills; 65 had headaches; 59 suffered vomiting; and 53 listed sweating as a side-effect. All of these are common side-effects of the parasite Cyclospora that was on the food they ate.

Forty-five victims ate food that likely contained The Garden Wholesale’s basil, at Cooper’s Hawk Winery, on June 11th, with about another three dozen eating food there on June 12th and 13th. More than 10 of the victims reported eating at the Cooper’s Hawk on the 14th and another dozen on the 15th.

In the month leading up to the outbreak, state inspectors visited Cooper’s Hawk restaurant twice in June. During the first visit, they noted four violations that included cleanliness and food storage issues. According to state regulators’ records, one of the violations was marked as “high-priority”. A follow-up inspection revealed that restaurant had one intermediate violation.