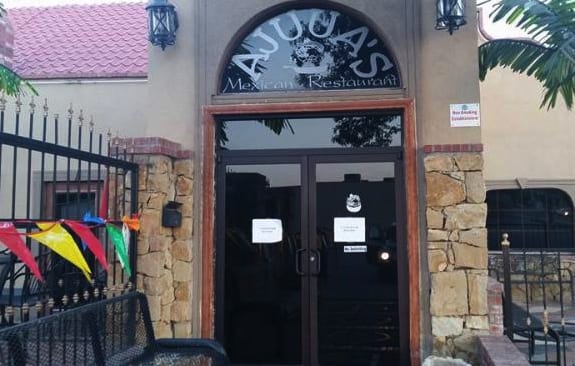 Ajuua’s Mexican Restaurant closed its doors last Monday at the request of the Health Department after two “confirmed Salmonella infections were traced back” to the restaurant, said Health Department Director Gino Solla. Restaurant management missed its target opening date, but only by one day and only due to the slow process of obtaining test results for employees as required by law. The restaurant opened with a skeleton crew of 10 on Saturday morning at 9:00 am.

Late Monday afternoon, local news outlet CBS 7 spoke with Solla, and the Director of the County Health Department confirmed that a seventh employee had tested positive for Salmonella. The fact that just under ten percent of employees tested positive is reprehensible.

Seven Employees Test Positive for Salmonella, Now Account for More than Half of Confirmed Outbreak Cases

All employees who work at Ajuua’s Mexican Restaurant in Odessa, Texas – a total of 74 people – were tested for Salmonella last Tuesday afternoon. Bruce Cunah, chief sanitarian of the Ector County Health Department, explained that the restaurant needed at least ten laboratory-confirmed negative test results for the bacteria before it could resume operations. On Monday, Solla announced that six restaurant employees tested positive for the bacteria. Another positive test result was received late yesterday afternoon.

On Monday, Solla announced that six of the employee test results that arrived that day had tested positive for Salmonella. Another positive test arrived later that afternoon, bringing the total number of confirmed outbreak cases to eleven.

From outbreak to outbreak, the percentage of restaurant patrons, grocery shoppers, and people going about their everyday lives will vary based on how virulent the bacteria is. The percentage of people who work in the food service industry that contract the illness should be lower due to training and preventative measures.

More importantly, employees are repeatedly told to stay home if sick or not feeling well. “These employees never mentioned any signs of being sick or having any symptoms,” Rubio said.

“We thought we were were going to get everyone back negative.”

In order to reopen, the restaurant had to meet a number of requirements. While the company complied with the “Letter of the Law,” its actions at times seemed to teeter on the edge of violating the spirit of the regulations. In addition, the actions of the restaurant seemed to run contrary to statements made by the Mexican restaurant’s CEO.

By late Friday evening, nine of the restaurant’s employees officially tested negative for Salmonella. At that point, Solla said, Ajuua’s made a new hire, giving the restaurant its tenth eligible employee and allowing them to resume operations with a minimally staffed skeleton crew.

The new hire came hours before the restaurant reopened, and right around the time that Julian Rubio, Ajuua’s Mexican Restaurant’s CEO, said the restaurant and its management “actually are taking more precaution here at the restaurant to educate ourselves more with training and make sure that the employees are well aware of what’s going on.”

“We’re going to do everything we can to better train out employees and make sure this never happens again,” Rubio said.

In this case, the his rhetoric seems to run contrary to its actions. If done right, new employee training takes more than a few hours and constitutes more than a crash course in how the restaurant operates, involves supervision by an established employee, and includes some measure of facility-specific food safety training.

Employees were required to attend a training session conducted by health department officials that offered the staff instructions on how to “handle food to avoid the spreading of the bacteria” and properly complete “cleaning of the restaurant.”

In addition, the restaurant had to remained closed until it underwent and passed inspection. Ajuua’s scored 87 out of a possible 100 points on the first inspection conducted by the County Health Department after the outbreak of Salmonella was linked to the restaurant. Inspectors cited the restaurant for a number of violations including failure to do the following: dispose of contaminated shrimp, dispose of oysters sitting in a pool of water, keep vegetables in a location that will avoid contamination by raw meat, and eliminate insects such as flies.

When inspected the next day, the establishment received a score of 100, though investigators noted a few non-critical violations that Ajuua’s must fix in relatively short order.

As of Monday evening, the number of laboratory-confirmed cases confirmed since the outbreak was first announced on June 6th stood at 11. Employees constituted seven, or well over half, of the eleven confirmed cases, while four cases had been confirmed among restaurant patrons.

Infected employees will not be allowed to return to work unless they seek medical treatment and can prove that they have had a subsequent test for the bacteria come back negative for Salmonella.

The 11 confirmed cases (excluding the new case confirmed late yesterday evening) are comprised of 50% men and 50% women, and range from 36 to 84 years of age, while the 23 probable cases – in other words, cases with lab results pending – consist of 13 men, seven women and three individuals of unknown gender.

The majority of individuals infected with Salmonella develop severe stomach cramps, diarrhea (which may be bloody), and fever between 12 and 72 hours after eating the contaminated food.

Most patients recover on their own within four to seven days.Children under the age of five, the elderly, and people with otherwise compromised immune systems are at a higher risk for developing severe – and possibly fatal – cases of the disease.

Should you seek medical attention, ask the physician to perform a stool test if they do not do so on their own. The results of that test are the only way you can prove that you had Salmonella at a later point in time.

In all cases, monitor your level of hydration. Symptoms that you may be becoming dehydrated may include thirst, dry or sticky mouth, infrequent urination, darker yellow urine; dry, cool skin; headache; and muscle cramps.

If you experience any of these symptoms, you are advised to seek medical care as quickly as possible.

If you or a family member became sick after eating or working at Ajuua’s Mexican Restaurant and are interesting in pursuing a legal claim, please contact the experienced food poisoning lawyers at Ron Simon & Associates for a free case evaluation.