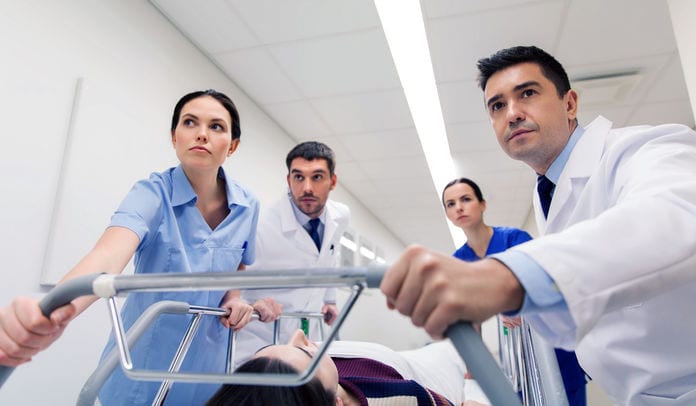 Food poisoning occurs when you eat food or drink a liquid that is contaminated with a virus, bacteria, parasite, or chemical, that then infects your gastrointestinal tract and causes serious inflammation of the stomach lining and intestines. This inflammation of the gastrointestinal tract is officially called gastroenteritis, but many people refer to it as the “stomach flu”, or more generically, simply “the flu.” According to the CDC, these illnesses are most often the result of Norovirus, a common virus that causes the dreaded stomach bug and not actually the Influenza (flu) virus. There are a few other viruses which can appear to be the “stomach flu”, such as Rotavirus, Adenovirus, and Astrovirus, but they are far less prevalent.

In addition to the commonly spread viruses, some of the most common types of bacterial infection that can cause gastrointestinal infection are E. coli, Salmonella, and Campylobacter.

The most common symptoms of food poisoning are diarrhea, stomach ache and cramps, nausea and vomiting, and a fever in some cases. Most healthy individuals are able to recover from routine, mild cases of food poisoning within about a week without needing medical attention, however, people over the age of 65, infants, expectant mothers, and anyone else with a weakened immune system can experience serious and sometimes life-threatening complications. The biggest danger of food poisoning infection that manifests itself as the “stomach flu” is extreme dehydration due to loss of water in diarrhea and vomiting. Dehydration can be very dangerous and cause other secondary symptoms such as a dry mouth, fatigue, decreased urine output, dark color urine, sagging skin around your eyes and cheeks, and reduced skin elasticity. In some cases it can also cause cardiovascular illness – including heart failure.

In these cases, or when dealing with anyone with a co-morbidity or weakened immune system, MEDICAL ATTENTION IS WARRANTED.  IF medical attention is sought, according to national food poisoning lawyer Ron Simon, “a stool culture or GOI panel should be performed.”

For many minor cases, however, these following three home remedies can behlepful in treating cases of food poisoning at home.

First, drink plenty of water. If you have symptoms of watery diarrhea or vomiting and are experiencing a dry mouth, excessive thirst, have a lower volume of urine output than normal, or any of the other symptoms mentioned above, you are probably dehydrated. When you are having a difficult time keeping anything down, it is important to start with small amounts of liquid at a time and build up from there. Try sucking on one ice cube at a time and once that settles and you see your stomach will tolerate it, have a few more a few minutes later.

Secondly, consider your diet. Once you can tolerate liquids, you are ready to try the BRAT diet. The BRAT diet, which is made up of foods that are low in protein, fat, and fiber—bananas, rice, applesauce, and toast—is easy on your stomach and will help you get and retain the essential nutrients you need to get well.

Finally, get plenty of rest. Your body heals itself during sleep and your immune system needs lots of energy to fight off the pathogen that is causing the infection, so be sure to get plenty of sleep.

While some individuals may require medical treatment to kick their food poisoning infection, most people are able to manage their symptoms at home using these three remedies: water, diet, and sleep.