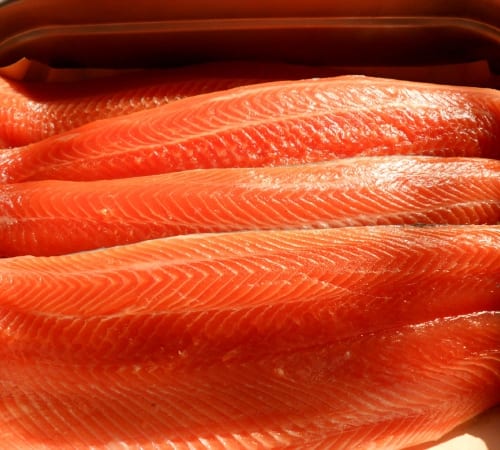 Sun-Dried Tomato & Roasted Garlic Trout is subject to a new recall by Clear Spring Foods. The recall is due to flour in the breading (wheat flour) that may be contaminated with E. coli O121.

The recalled trout filets were sold at Schnucks between May 27th and October 6th at the stores’ seafood departments.

One suspects that the flour used in breading the trout is part of the recalled General Mills flour, contaminated with the same strain of E. coli as the product in question. That recall was first announced in May 2016, leading to questions of why it took the institution so long to recognize that it was utilizing the recalled flour and to alert the public.

In fact, it took Clear Spring Foods so long to recognize that they were using contaminated ingredients in preparation of the trout that the Centers for Disease Control and Prevention (CDC) investigation into the outbreak – which sickened 63 people in 24 states – had already been declared over (the CDC issued a release to that effect on September 29, 2016).

Clear, however, is the fact that the CDC and FDA contemplated that remaining contaminated flour would be kept in unwitting consumers’ houses, not in large, institutional food establishments that have procedures for dealing with product recalls. The fact that it took Clear Spring Foods such a long time to recognize that the flour that they were using in a product being sold to consumers is alarming, to say the least.

In its recall announcement, the store acknowledges that “although most strains of E. coli are harmless, E. coli 0121 is a potentially deadly bacterium. Seniors, the very young, and persons with compromised immune systems are the most susceptible to foodborne illness.” To put it succinctly, the store has been using an ingredient known to be contaminated with a “potentially deadly bacterium” and selling it to its customers over a period of months, an entirely avoidable situation.

If you or a family member became ill have been diagnosed with E. coli and you would like to explore pursuing a legal claim, consult an E. coli lawyer at Ron Simon & Associates today by calling 1-888-335-4901 or contact us online.