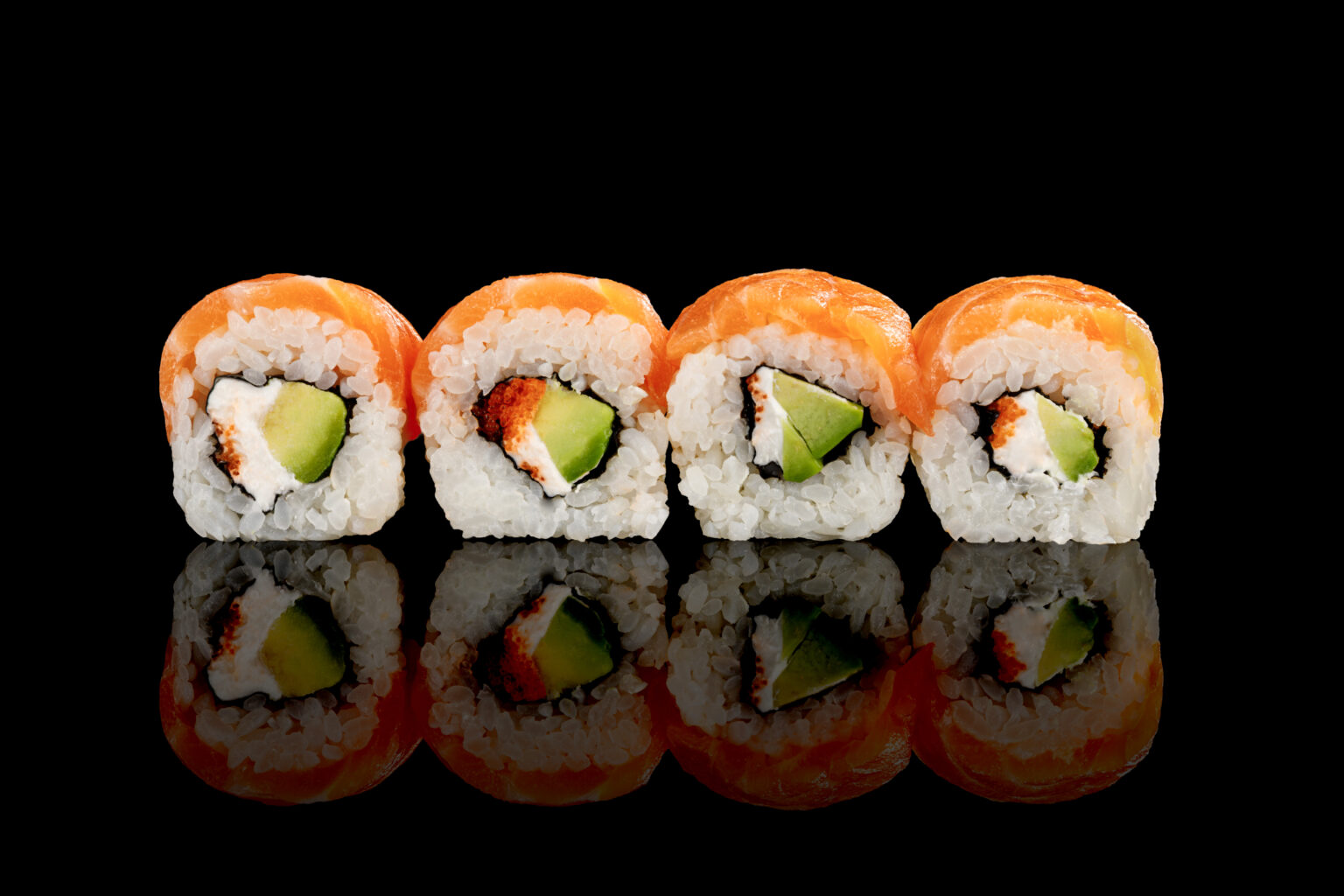 Sushi May Cause Food Poisoning
Featured

In 2018, a California man made headlines when he pulled out a 1.5-meter tapeworm from his body—which may have been caused by the consumption of raw fish in sushi.

In another case, a 32-years man was admitted to a hospital with severe abdominal pain days after eating sushi. The doctors found a tapeworm attached to the mucus of his intestinal walls, and the symptoms resolved immediately after the worm was removed. Were these a one-time occurrence, or what are your odds of getting illnesses from eating sushi?

While sushi-related infections are uncommon, eating sushi is not completely without risk—especially if the raw fish or seafood is not handled and prepared according to the FDA regulations.

This guide will answer your top questions about food poisoning from eating raw fish in the Japanese delicacy—sushi!

How Likely Are You To Get Sick From Eating Sushi?

Sushi is a potential source of foodborne illness because of its raw fish content. Fish is a healthy food, but eating raw meat, like other animal products, poses a significant health risk.

According to the Food and Drug Administration (FDA), raw fish or seafood can contain disease-causing bacteria, parasitic worms, toxins, and viruses.

In one study of 250 sushi samples, salmonella was found in 1.6 percent of the samples and listeria in 1.2 percent. This means that it’s possible to contract salmonella infection or listeriosis, among other foodborne illnesses, by consuming raw fish in sushi.

So, if you enjoy sushi, you don’t have to be scared away from your favorite Japanese cuisine as long as you get it from a reputable source that handles raw fish per FDA regulations.

What Are the Chances of Getting Food Poisoning From Raw Fish?

For most healthy adults, eating raw fish poses a minor health risk, but it can be life-threatening to others. People who are at a higher risk of contracting a severe disease from eating raw or undercooked fish include:

If you’re in the higher risk group, it’s best to avoid consuming raw seafood at all costs.

What Is the Problem With Eating Raw Fish?

Eating raw fish can expose you to parasites like Anisakiasis, environmental contaminants, and disease-causing bacteria like vibrio.

If bacteria grow in non-fresh fish, they can produce histamine enzymes, which can cause scombroid poisoning.

Scombroid poisoning is one of the top four most common seafood-borne illnesses. The symptoms, which include facial flushing, dizziness, sweating, nausea, and headache, occur within minutes to 2 hours of consuming infected fish. Thankfully the symptoms usually last for about 6 hours and rarely last more than two days.

You can also get ciguatera food poisoning by consuming some contaminated tropical and subtropical fish. This type of poisoning causes gastrointestinal and neurological symptoms. Ciguatera symptoms can clear within days or weeks but sometimes can last for years.

What Are the Types of Infectious Diseases That Can Result From Eating Raw Fish in Sushi?

Below are the types of foodborne illnesses that you can contract from eating raw fish in sushi or sashimi:

Anisakiasis, also known as herring worm disease, is a parasitic infection caused by ingesting anisakis worms found in raw or undercooked fish or seafood. The symptoms, which include vomiting, nausea, and severe abdominal pain, can appear within a few hours of eating contaminated fish.

There are about 20,000 cases of Anisakiasis per year worldwide, and Japan accounts for 90% of them. In the United States, it’s a rare disease, but cases have been rising due to the popularity of sushi and sashimi.

The worms can burrow into the intestinal walls, and in severe cases, they must be removed via surgery or endoscopy.

This infection is caused by the listeria bacteria found in raw seafood, smoked fish, and other types of raw foods like vegetables and unpasteurized dairy products.

CDC estimates that about 1,600 people contract listeriosis annually, and about 260 die.

The infection causes mild illnesses with fever and diarrhea symptoms, but it can cause meningitis if it infects the nervous system. Pregnant women, newborns, and adults 65 and older are more likely to develop a life-threatening illness.

It is an infection caused by the vibrio bacteria and accounts for about 80,000 infections and 100 deaths in the U.S. annually. Fifty-two thousand of the illnesses result from consuming contaminated foods, like raw seafood.

The symptoms of vibriosis include diarrhea, fever, abdominal cramps, nausea, and vomiting. Vibriosis can lead to a life-threatening infection for people with weakened immune systems or liver disease.

Salmonella is one of the most common types of food poisoning. An estimated 1.35 million salmonella cases, 26,500 hospitalizations, and 420 deaths occur in the United States each year.

Salmonella can be contracted from various foods, but sushi and smoked seafood pose a higher risk due to the raw fish and seaweed content.

The disease symptoms, which include stomach cramps, diarrhea, and fever, can set in within six hours or up to six days of consuming contaminated food. The symptoms resolve within seven days for most people, but they can last for several weeks for others.

How Do I Know if I Have Food Poisoning From Sushi?

The sushi food poisoning symptoms could be mild or severe depending on your health status and the germ you ingested. The most common symptoms that you should pay attention to include:

You can confirm if the symptoms result from sushi consumption by visiting your doctor.

How Long Does It Take for Food Poisoning From Sushi To Set In?

Symptoms of food poisoning may take anywhere from 30 minutes to days to develop after eating fish infected with bacteria or parasites. The duration can vary depending on the infectious disease you have contracted.

What Should I Do if I Get Food Poisoning From Sushi?

If you experience any of the symptoms of food poisoning, such as diarrhea and vomiting, you should take more fluids to prevent dehydration.

If your symptoms persist or you experience severe symptoms—such as bloody diarrhea, high fever (above 38.9°C), bloody urine, or signs of severe dehydration (like dry mouth or little to no urination)—you should see your doctor immediately.

Thankfully, like most cases of food poisoning, symptoms can resolve in one week with or without treatment in mild cases.

However, some cases are severe and may necessitate hospitalization.

How Much Sushi Is Too Much To Eat in One Sitting?

Eating fish is recommended as part of a healthy diet and can improve your heart health. Is there such a thing as too much sushi?

The more sushi you consume, the more likely you are to get low-grade mercury poisoning. All fish contain some mercury, but some large ocean fish, such as tuna, have higher levels. Mercury poisoning can cause numbness, memory problems, muscle weakness, tremors, and depression.

Healthy people can eat two to three sushi rolls per week or about 10-15 pieces. You should try to limit your consumption of varieties that contain too much mercury and follow the weekly dietary guidelines for Americans.

According to the FDA chart, you should consume two to three servings of fish each week from the “Best Choices” list. Alternatively, you can eat one serving of fish from the “Good Choices” list. One serving is equivalent to the palm of your hand and weighs 4 ounces. Following these guidelines will help you avoid ingesting too much mercury while reaping the dietary benefits of fish.

If you want to minimize your risks of getting a sushi-related illness, buy your rolls from a reputable source, such as a busy sushi restaurant or your local supermarket.

It’s best to avoid making homemade sushi unless you are well trained to handle and prepare it. If you must prepare it yourself, purchase sushi-grade fish that has been frozen per FDA regulations.

You should also consume your sushi as soon as possible. If you plan to eat it more than two hours after preparation, keep it in the fridge. However, don’t keep it in the refrigerator for more than 24 hours.

While it’s rare, you can get food poisoning from eating raw or undercooked fish in sushi or sashimi. The foodborne illness can result from worms (like anisakiasis) or bacteria (like listeriosis).

Such infections usually cause symptoms such as diarrhea, vomiting, and nausea. The symptoms typically resolve within a week, but they can lead to hospitalization in severe cases or persons with weakened immune systems.

Pregnant women, children under five years, and people with a weakened immune system should be more careful about consuming raw fish products. Even if you’re healthy, always ensure your sushi is from a reputable sushi restaurant that handles and prepares raw fish according to FDA regulations.